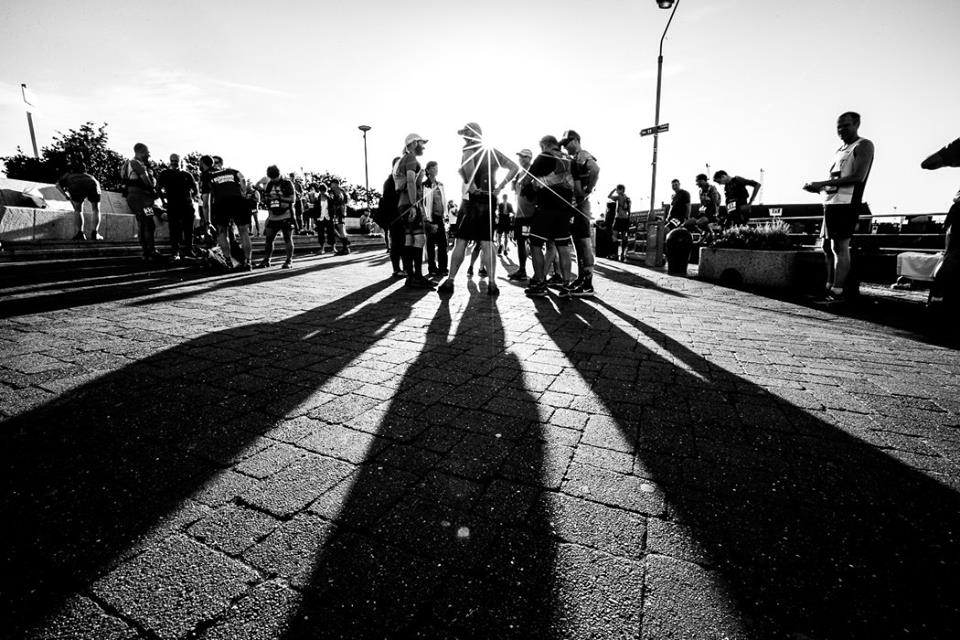 The dust has settled on the coastal paths of Guernsey, the marks have been removed and most folks from “abroad” have returned home, hopefully happy and basking in the glory of their achievement.

Or is it the sunburn?

Race day dawned bright and sunny with just a slight breeze.  With the start/finish gazebo and a final check on the registration process, it was not long before the competitors started to arrive; some apprehensive, some relaxed but all seemed happy and friendly.

Before long, all runners were registered, had their numbers and drop bag label, and were busy writing their names on the race numbers.  Unfortunately, four chose not to start so out of the 75 places (69 due to start), 65 were set to start the race.

Race briefing started on time at 06:45 but didn’t take long.  Not much to say here except the obvious safety instructions, course markings and keep the sea on your left!

One of the things I love about “proper” ultra races is the low-key start.  Who needs a lot of build up to what is, in essence, a simple endeavour?  You start, run a ridiculous number of miles and (hopefully) finish.  So it was without such fuss, the runners were lined up in front of the Liberation Monument (touch this to finish) and, after a final reminder as to which side the sea should be on (the left), I merely said “off you go” at 07:00 and the 2017 GU36 was begun.

It was heart-warming to watch the runners make their way south through St. Peter Port, followed by our Sweeper for this section (Brian Green) and almost unbelievable that, after 12 months of planning, I was finally seeing this.

With the runners safely on their way, the teams got busy loading the drop bags into the van and heading off to their locations.  As the first checkpoint at Petit Boy (8 miles) was just a water stop, I was manning this on my own so was really grateful that Jonny (Sweeper for the next section) turned up early and was able to help out with filling water bottles etc. (not in his brief) as I had my hands more than full with recording times.

The first 6 runners came through close together with Andy Hatton in the lead followed closely by Ricardo Teixeira and Graham Booty within seconds of each other.  Alex Roger and Marc Guille came through a minute or so later and all these barely stopped and it was obvious these guys were all out to win.

A fair chunk of runners had already come through when Jonny and I started applauding an approaching runner – but we couldn’t see a number?  “No I’m not in the race”, he said as he approached, “but someone has removed the marks at La Jaonnet!”.  He then went on say that he had improvised a mark and to offer to take some ribbon and remark it.  We were amazed at this as we knew what the terrain was like on the mile back to the turning.  It turned out that he was training for the Bob Graham Round and “wanted to get a bit of elevation in today anyway”!

This turn is particularly bad as it would seem natural to take the left turn on the path which takes you about quarter of a mile down to the bay, only to realise that (unless you fancy descending the ladder to the beach to have a swim) you have to make your way back up the steep path and steps to the turn.  For this reason, I had marked this with about 6 ribbons and 4 chalk marks so people didn’t make this mistake.  This strikes me as particularly malicious as the person or persons who did it must have known that this would happen and needed to make a real effort to scrub out the chalk as well as removing the ribbons.  I suppose they though it was funny.  It’s not.

Unfortunately, I have forgotten the name of our good Samaritan but he did say he is a former RD of the 10 Peaks so please let me know if you know who he is as I owe him some beers and a free place!

All runners made it through by the cut-off except one who had recently completed the MDS and was still feeling it I think.  As a local, I was happy to let her continue and see if she could get to CP2 by the cut-off.  However, as she was now walking and knew the route (and had her phone), Jonny pushed ahead to collect the marks for the next section and to be closer to the back markers of the main pack.

My job now was to take Brian back to the start and to prepare the finish.

Keeping in touch with Liz, Dawn, Jacqui, Linda and Alan on Checkpoint 2, I was able to get an idea of the runners’ progress around the course.

The first 5 runners through here arrived with seconds of each other at 2 hours 37 minutes.  Sadly, Andy Hatton decided to withdraw due to injury so the race for the places was left to Ricardo, Marc, Graham and Alex.  This is about my own PB for just the cliff section (known locally as the “Dogbreaker”) set years ago when I was a faster and is impressive when you have another 20 miles left to do!  However, I was beginning to doubt that Tiaan Erwee’s 4:57 course record was to be broken today although the leaders’ strategy may have been to run a fast “flat bit” so you can never tell.

The next group arrived at CP2 around the 3 hour mark.  Most impressive of these was Martin Lock at 3:08 as this was to be his first ultra (finished 10th).  A few more retired at this point mostly through injury but all bar one reached the checkpoint within the cut-off.  The pace required for the cliffs section is 18:45 m/mi so I was pleased that the cut-off (5 hours) is set about right to allow people time on the cliffs.

I think by now most were beginning to feel the effects of the warm weather and would feel this more on the next flat 20 miles as there is little shade.  High clouds were beginning to form and the breeze increased which helped a little but not much.  Being an ultra, the competitors were well briefed to have the capacity to carry enough water on these two long sections.  If stuck, there are many beach kiosks on this section to replenish supplies.

I was phoned by a local runner asking for clarification at Vazon as it seems that more marks had been removed here.  However, if a runner missed going to the left of the café and continued on the road (as some did) there would not be much missed as the course cuts across the headland instead of going right out to Fort Hommet. This is difficult to mark clearly and will be reviewed for next year’s race.

Graham Booty was first to arrive at CP3 but was being hotly pursued so needed to push hard on the next section.  Other runners were flagging by now but all were encouraged to continue by the CP crew and only one decided to retire at this point.

I think everybody successfully found their way around the common (where we had some problems last year) but I had another phone call from somebody who had gone wrong near Beaucette Marina.  I’m putting this down to tiredness because, although some ribbon had been removed here, the orange chevrons were still clear but had obviously been missed by some.  The majority seemed to find their way through the quiet lanes that follow an inland diversion because of the marina and quarry on this stretch of coast.

Meanwhile, back at the start, Graham Booty finished in 05:34:26 which was off the record time but doubtless due to the conditions.  Graham must have pushed hard on the last section and was suffering from the heat.  Next in was Marc Guille in 05:38:49 which was about 20 minutes faster than he achieved last year.  Ricardo Teixeira was over the moon to make third place in 05:42:24 again, and improvement on his time last year of 05:54:45.  Alex Rodger narrowly missed out on an award arriving only 2 minutes after Ricardo.

Vicky Carre had been surprised to learn at CP3 that she was currently first female and pushed on to consolidate this with a solid time of 06:41:45 – stunning as this was her first ultra!

So many people who were doubtful that they could complete this challenge went on to finish and proudly collect their medal and t-shirt, with a little pin badge for completing their first ultra.  All runners who left CP3 made it back within the cut off so, again, this says to me that we have the timings about right. Only one who left CP2 did not make it to the finish which goes to show that, if you survive the cliffs, you can make it through the rest.

Of the 20 1st time ultra runners who started the race, only 2 DNF. Two 1st timers finished in the top 10 including our amazing 1st female Vicky Carre (8th) and Martin Lock (10th). No first timers were timed out.

There is no doubt that this is not an easy ultra but I think the results show that it is achievable for first timers who will be able to take pride in the fact that their first ultra wasn’t an easy one.  The conditions on the day made it harder but, on the other hand, the sunshine makes everything just that little bit more cheerful.

Finally, a big thank you to the volunteers who really made the race.  Despite some of them being more experienced than others (most were first time ultra crew) they did a smashing job if the comments of the competitors are anything to go by.

All in all a successful and enjoyable event.   I hope that everyone enjoyed the race and their stay in Guernsey.